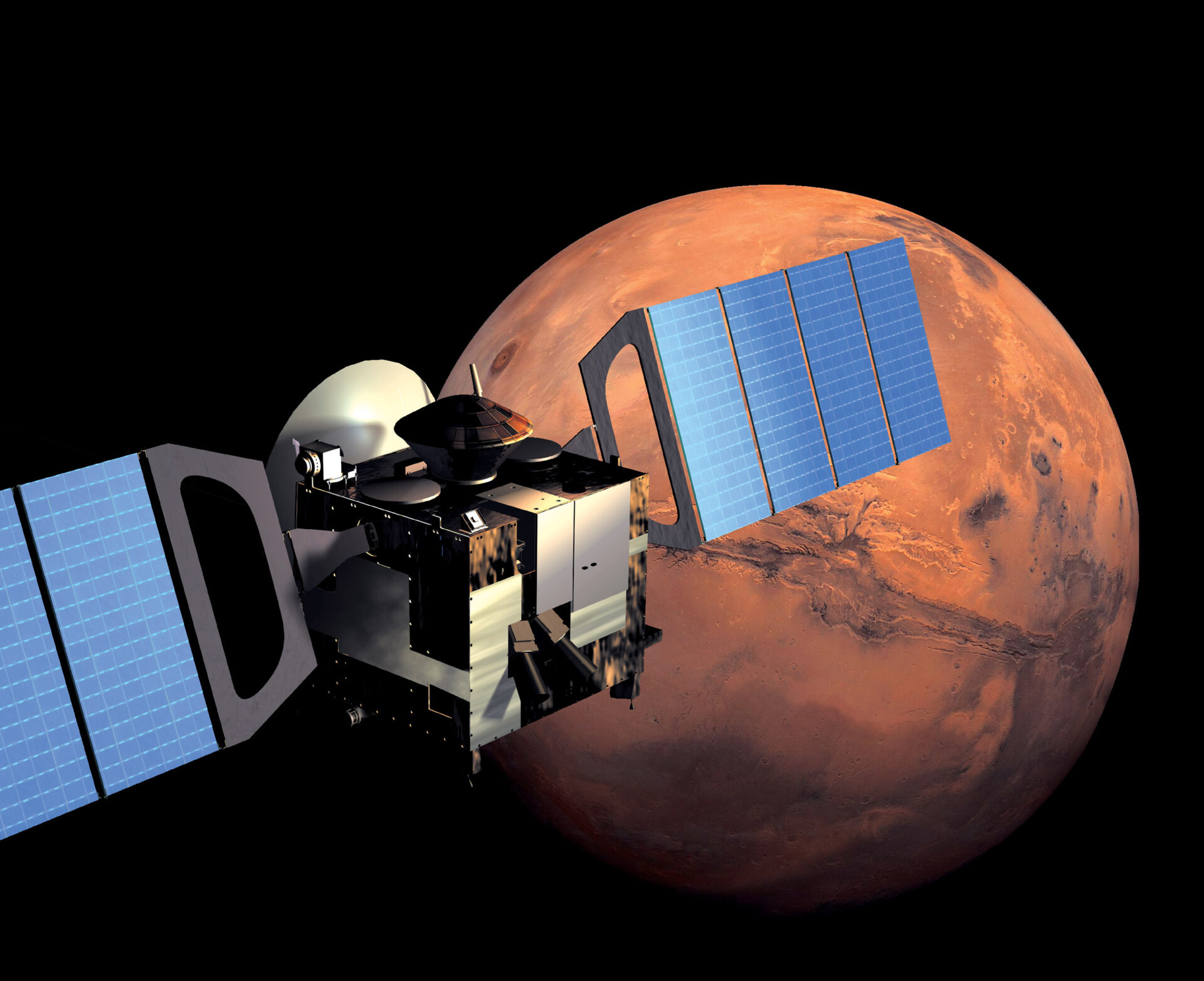 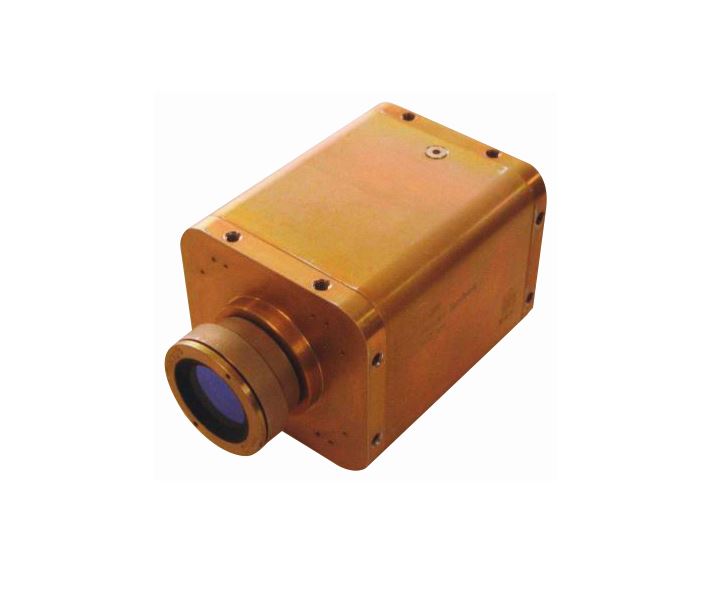 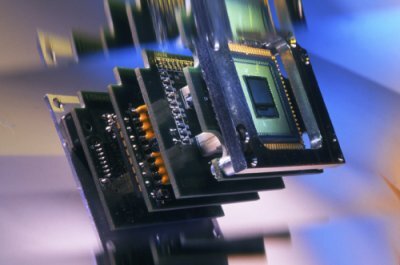 OIP, together with IMEC (B) and Cypress (B), developed small cameras based on FUGA and IRIS-1 sensors, for the observation of the deployment of solar panels, antennas and separation of satellites.

OIP was responsible for the development of the miniaturized VMC cameras.

An ordinary camera in an extraordinary world

The cameras were successfully flown on Cluster-II, XMM-Newton and Mars-Express.

Visual feedback of the spacecraft environment during and after the satellite separation phase in orbit has both a public relation as well as a scientific/technologic function. The deployment of mechanisms such as solar panels, antennas, robotic arms, etc. can easily be monitored by means of small modular cameras imbedded on the satellite or spacecraft.
From the early beginning, OIP was involved in the development of those small modular cameras based on CMOS sensors (ESA contracts) and have hence built a large experience directly related to the Visual Monitoring Camera development.

OIP set the design goal to create a camera that can be flown on a multitude of missions, using the latest achievements of modern sensor technology. The cameras can be easily modified conform the mission requirements.

The Visual Monitoring Cameras, developed by OIP, can be classified as either “miniature” type, a “flat” type (with objective on top) and a “cubic” type.

The “miniature” cameras were the first series developed by OIP.

The Visual Monitoring Camera is a digital camera providing color or grayscale images (depending on sensor choice). It accepts image capture and exposure control commands, performs image acquisition and stores the images in a local memory (to facilitate read-out at a low data rate). The camera accepts commands from, and transmits image data to, a standard serial digital interface. 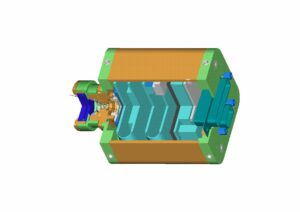 The VMC cameras consist of an objective, an array detector, electronics circuitry and a camera-housing.

The camera objective projects the image of the target on an array detector.  The objective takes sharp images between 3 m and infinity.

All VMC cameras are equipped with a CMOS sensor, IRIS-1 integrating CMOS Active Pixel Sensor (APS). The electronics circuitry consists of a number of Printed Circuit Boards (PCBs), interconnected by means of flexible prints. The sensor is mounted on the first PCB and positioned in the focal plane of the objective. The first generation “box” type VMC cameras (i.e. on XMM) could only store one image in a local memory buffer. The second generation (i.e. on CLUSTER II) had an external add-on memory box, the XMXU, offering in-line storage for about 10 images. The lately developed “flat” and “cubic” type VMC cameras include a full complement of SDRAM in the shape of 3Dplus’s stacked memory module.
The mechanical housing accommodates the electronics, the objective and the baffle.

The purpose of external spacecraft monitoring is to provide feedback of spacecraft status during deployment of e.g. antennas, instrument booms and solar arrays. The classical approach using indirect information collection from sensors is becoming impractical when spacecraft and space stations grow larger and have more appendices. A new approach has therefore been introduced using visual systems for direct visual confirmation of spacecraft conditions to complement the classical methods. The use of visual monitoring gives additional benefits such as detection of structural deformation, in-orbit spacecraft surface damage analysis and failure diagnostics.

The purpose of mounting a VMC on the Mars Express Orbiter was to capture the separation of Beagle2 lander as it drifts towards the Martian surface. Later on, the aim of the camera will be re-directed as it will become the first Mars Webcam.

The purpose of mounting the VMC’s on XMM was to observe the deployment of the solar arrays and the sunshield. A secondary objective was to provide visual feedback for public relations purposes.

The purpose of mounting the VMC’s on the Cluster II Spacecraft was to capture the separation of 2 unmanned satellites as they drift apart. A secondary objective was to provide visual feedback for public relations purposes.

Recently, this camera was awoken from hibernation and served as training module for students and engineering at ESA (operations). Read more on this link.

OIP was responsible for the development of the miniaturised VMC cameras. These cameras showed successful results during the XMM,
CLUSTER II and the MARS-EXPRESS mission.

The VMC became a great Outreach success for ESA as all used VMC, with intended ‘mission life’ of a few weeks to months, have been re-commissioned after several years in hibernation to become so called space webcams. The most famous one is the Mars Webcam, which even has it own Mars Webcam blog.

3 Years after capturing the last picture of the Beagle-2 lander drifting away, the decision was taken to study the possibility of reviving the VMC camera in a completely different role. With its wide field of view, and unique (for a ‘webcam’) location around the planet Mars, it provided a very attractive prospect to ESA public relations and of interest even to the science community. With success. The camera helps the scientific community and even helps young students and ESA/ESOC trainees in their courses and education. What an achievement for a tiny camera. It put OIP on the camera picture map at ESA and the VMC got and a mention at the Europlanet Outreach Awards (Award). 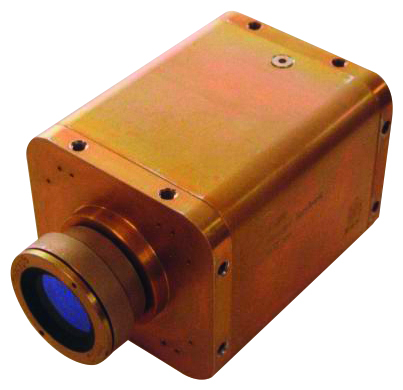 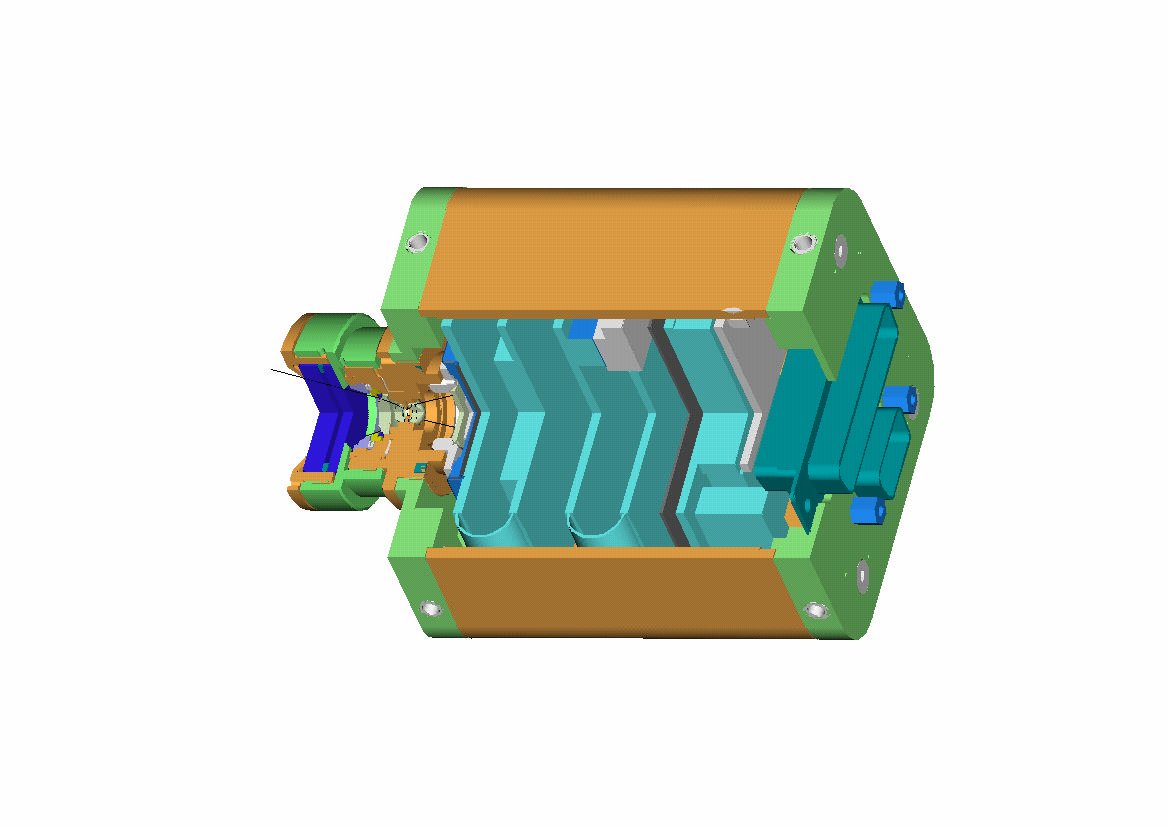 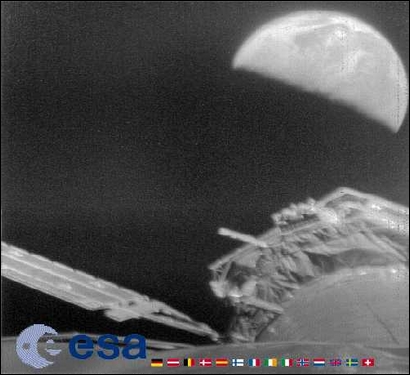 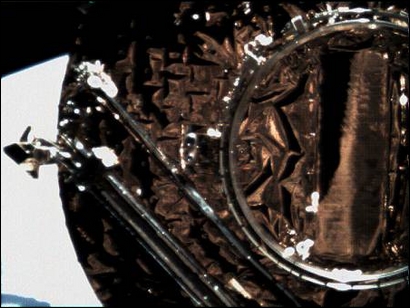 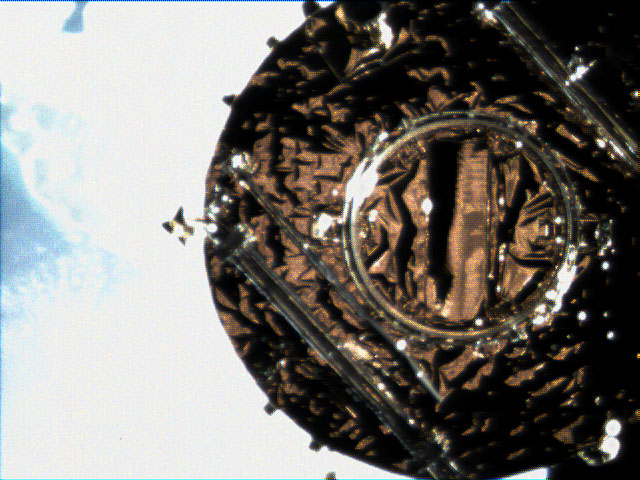 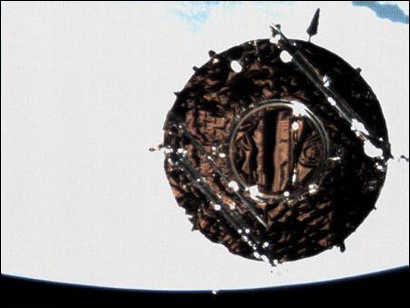 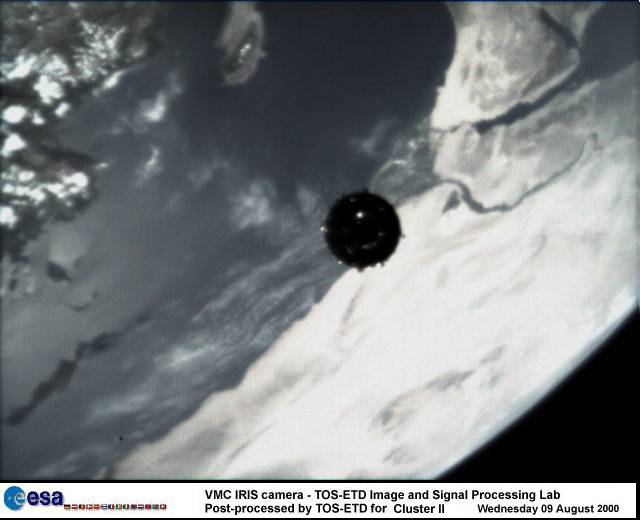 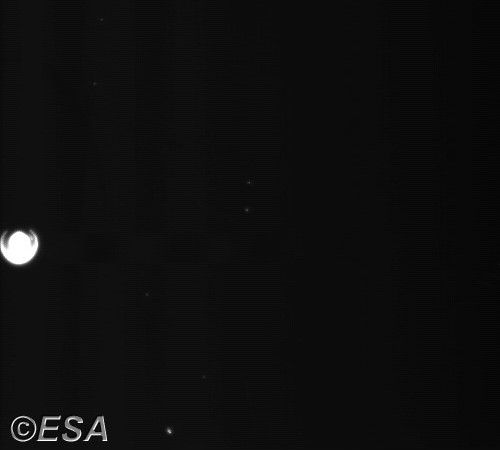 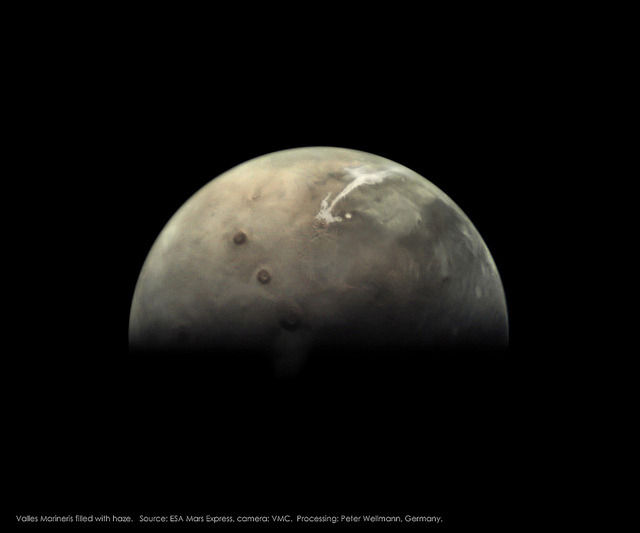 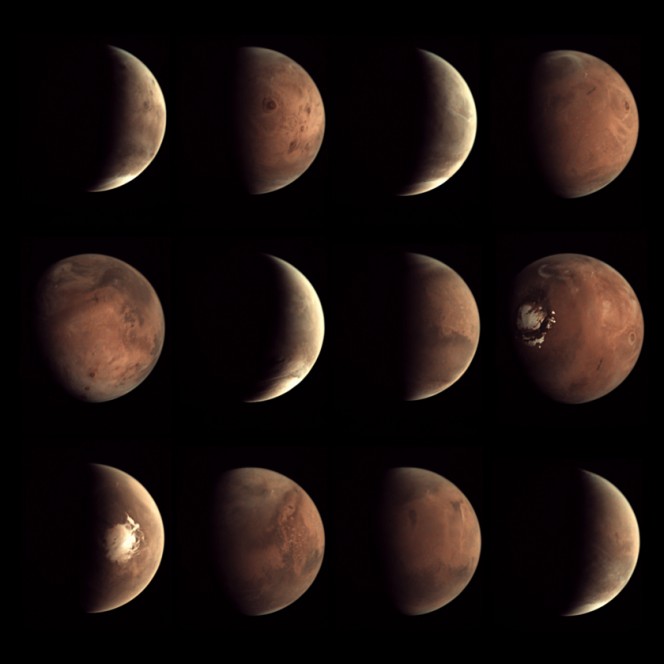